With determination, passion and the help of a generous community of supporters, the CF Goldfields group smashed their fundraising target four times and raised a total of $15,000 over three months!

The CF Goldfields group have been supporters of 65 Roses month for a long time now, helping to raise significant awareness and funds in the Goldfields of Western Australia. This year they wanted to do something different and decided on attempting a big 65 Roses Challenge, walking the Cape to Cape in WA’s south west. 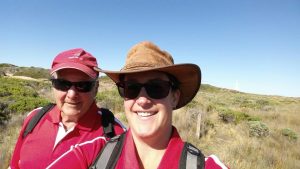 Members of the group, Peggy and Jennifer, said “our original goal was to double last year’s fundraising, which was a modest $600. We surpassed our first target of $1,500 within a week.” They increased their target three times before hitting their final fundraising goal of over $15,000!

Jennifer and her brother Rick walked the Cape to Cape in a week, beginning at Cape Naturaliste and ending at Cape Leeuwin Lighthouse. Then Peggy and her father Wilf started their walk following in the same path a week later. Together the two teams walked a combined 270km over 14 days.

The group would like to thank their families for their support, as well as Evolution Mining Mungari Operations, Robert Grimm, Suart Tonkin (Northern Star), Sara Young and Phil Yates (Versatile Plant Hire & Contracting) for their contribution to the challenge.

Read more of their story on the CF Goldfields Facebook page and their fundraising page.