Cystic fibrosis (CF) is one of the most common, autosomal recessive, life-limiting diseases affecting children and adults in Australia. It causes thick, sticky mucus which affects the lungs and digestive system.

In the 1950s babies born with CF often died in infancy. However, babies born today can expect to live well into adulthood as CF becomes a more manageable disease due to advances in research and new treatments.

The gene involved in CF gives instructions for the cells to make a protein that controls the movement of salt in and out of the cells. This salt transport gene lies on chromosome 7. All of us have two copies of chromosome 7 and therefore everyone has two copies of the salt transport gene. Scientists have called this gene the CFTR (Cystic Fibrosis Transmembrane Regulator) gene.

People affected with CF have a defective CFTR gene, causing a malfunction of the movement of salt in and out of the cells lining the exocrine system, which is responsible for producing saliva, sweat, tears and mucus. As a result, there is a constant build-up of excessively thick and sticky mucus within the lungs, airways and the ducts within the digestive system.

Is There a Cure?

At present, there is no cure for CF. Now that the CFTR faulty gene has been identified, global research is moving towards finding ways of repairing or possibly replacing it.

How Do You Get CF? 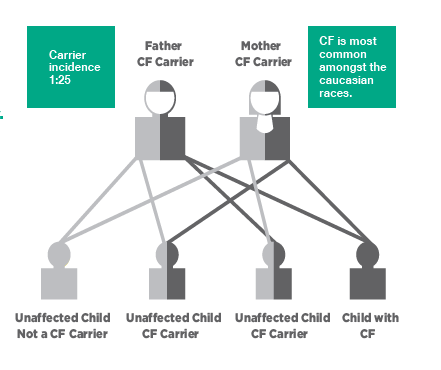 On average, 1 in 25 Australians carry the defective CF gene. However, carriers do not exhibit any symptoms of the genetic disease and most live their lives unaware of being a carrier of the CF gene. In fact, anyone could be a carrier. In Australia about 1 million people are carriers, without being aware of it.

The severity of symptoms varies from person to person, and many different factors can affect the course of the disease and the health of a person living with CF.

In the respiratory system, thick mucus clogs the airways and traps bacteria, resulting in recurrent infections which cause irreversible lung damage. Lung failure is the major cause of death for someone with CF.

These are some of the common respiratory symptoms:

In approximately 85% of people with CF, the digestive system is affected resulting in impaired pancreatic function. Release of enzymes needed for the breakdown of food and the absorption of vital nutrients is inhibited resulting in poor growth and difficulty with weight gain.

These are some of the common digestive symptoms:

Other symptoms may include:

Airway clearance, or chest physiotherapy, is needed to remove thick, sticky mucus from the lungs to prevent lung damage. It is usually started from diagnosis with CF and continues throughout the person’s life.

Diet plays a very important role in the management of CF. In fact, nutrition is so important that a healthy body weight can be linked to better lung function. Pancreatic enzyme replacement therapy is required for people with pancreatic insufficiency.

Common medications include enzymes, bronchodilators, mucolytics, antibiotics, anti-inflammatories, salt, vitamins and more. Medications may be taken orally, inhaled via a nebuliser, other inhaler device or given intravenously.

For people with CF, some bacteria and viruses can cause major lung infections, resulting in hospital admissions and permanent lung damage. Part of everyday life for a person with CF involves reducing the risk of catching an infection, through good hand hygiene practices and avoiding people who are unwell. Individuals with CF also need to avoid contact with other people with CF due to cross-infection of bacteria.