Although a multi-organ disease, it is the pulmonary disease that presents the most challenge and continues to be the main cause of mortality. Most individuals have respiratory disease and exocrine pancreatic insufficiency. The Cystic Fibrosis Transmembrane Conductance Regulator (CFTR) defect is expressed in many epithelial cells including sweat ducts, airway epithelium, pancreatic ducts, intestine, biliary tree and vas deferens.

Prevalence of Major Organisms in Lungs 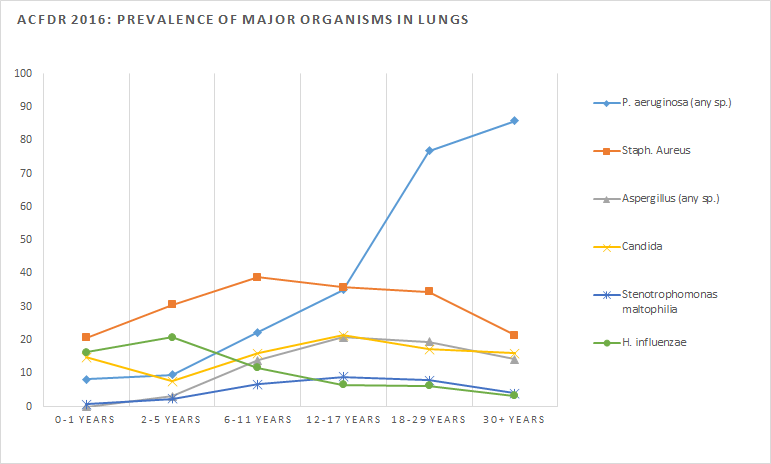 Airway clearance is an important part of CF management and should be used across the lifespan. The physiotherapist’s role involves teaching effective clearance of secretions from the lungs and promoting optimal lung health and general physical fitness. Research has found that no single airway clearance technique is superior and since CF affects each person differently, a treatment program is designed specifically for the individual, and needs to be reviewed regularly. Regular contact with the physiotherapist can help identify small changes, which may be hard for the individual to detect, thus allowing adjustments to the treatment program.

Physiotherapy treatment should be increased when a lung infection occurs and may be more effective when combined with inhaled medications and exercise (Button et al, 2016). 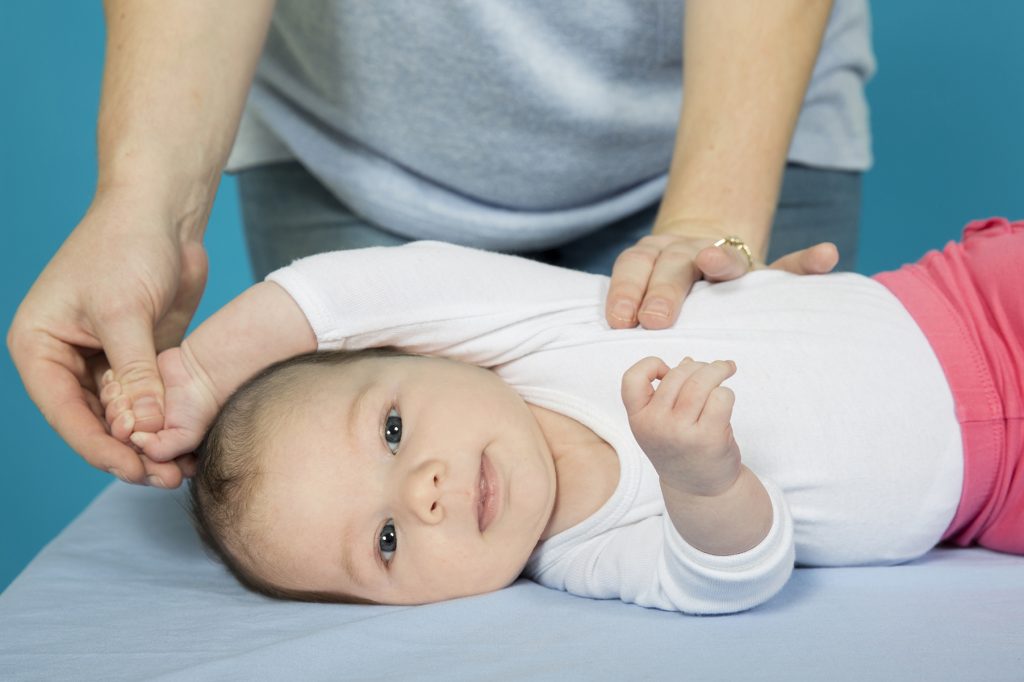 Another very important early recommendation for airway maintenance is regular exercise. Physical exercise that increases minute ventilation leads to the mobilisation of secretions and enhances airway clearance. It is recommended that all patients should be encouraged to exercise several times a week.

Managing CF is complex and drug therapy is an important part of CF treatment. Medications are used to ease symptoms, reduce complications and improve quality of life. They may be inhaled, oral or given parentally. A major achievement in treatment are medications that target gene mutations known as CFTR modulator therapies.

Those with CF may require long term antibiotics to treat respiratory exacerbations. Peripherally Inserted Central Catheters (PICC) are used when vascular access is required for more than a week. Infusaports are used for long term access.

Inhaled mucolytic agents are often used as an adjunct to airway clearance techniques and allow direct deposition of drugs to reduce mucus viscosity.

Antimicrobial therapy has been strongly associated with increased survival in those with CF. Long-term use of antibiotics has been significant in slowing lung decline. Antibiotics in CF can be administered orally, by inhalation or intravenously. Commonly used antibiotics may include amoxycillin and clavulanic acid (Augmentin Duo®), flucloxacillin, ciprofloxacin and tobramycin.
Azithromycin is often prescribed for children in subtherapeutic doses. These macrolides are thought to suppress proinflammatory cytokines and reduce the neutrophil burden on the lungs.

CFTR modulators are a new drug therapy that differ from other CF therapies as they aim to improve or restore the function of the defective CFTR protein, rather than offer symptomatic treatment. These therapies are mutation specific. The individual modulators act in different ways to improve the mutant protein function by potentiating action at the cell surface (increasing CFTR channel opening) or correcting the defect by increasing the amount of CFTR protein at the cell surface. Work continues on new modulators in an effort to find an effective treatment for all people with CF.

Currently in Australia the CF community have access to Kalydeco®, Orkambi® and Symdeko® with many new modulator therapies emerging.

Pneumothorax is defined as the presence of air or gas in the space between the visceral and parietal pleura of the lung, which can impair oxygenation and/or ventilation. A sudden onset of breathlessness in patients with CF should be investigated promptly to identify the possibility of a pneumothorax. In more severe cases, hypoxemia and hypercapnia may be observed (Ronan, Elborn & Plant, 2017). In CF, pneumothorax is a marker of disease severity and often associated with lower FEV1, pancreatic insufficiency, haemoptysis and infection. While a small pneumothorax can be managed conservatively, a larger pneumothorax may require surgical intervention.

Haemoptysis is defined as the expectoration of blood, or blood-stained mucus, from the lower respiratory tract. Mild to moderate haemoptysis may be an indicator of infective exacerbation and is generally treated conservatively, withholding some of the usual CF treatments and adding antibiotics to treat infections. Treatment of moderate haemoptysis may also include tranexamic acid. Massive haemoptysis may be associated with a positive sputum culture for Staphylococcus aureus and cystic fibrosis related diabetes (CFRD). It is life-threatening and often requires surgical management (Ronan et al, 2017).

Gastrointestinal tract manifestations of CF are related to mucus, dehydration, viscosity and dysmotility.

Patients with CF may present at birth with meconium ileus and have higher incidence of complete or partial bowel obstruction, commonly known as DIOS. They may also be more prone to constipation, gastro-esophageal reflux disease, and infections such as C.Difficile. Approximately 90% of Australian CF patients are pancreatic insufficient with consequential poor weight gain, malabsorption of fat and fat-soluble vitamins (Ronan et al, 2017).

Lung function and nutritional status are closely linked. Malnutrition related to inadequate energy intake is a common problem in CF patients. Interdisciplinary management is essential with involvement of a gastroenterologist, endocrinologist and dietitian to manage gastrointestinal (GI) co-morbidities.

The resultant malnutrition and poor growth associated with fat malabsorption and pancreatic insufficiency is often accompanied by steatorrhea, abdominal pain and failure to thrive. With CFTR modulator therapy, the emergence of the overweight CF patient is an increasing phenomenon. It is important patients are screened for undernutrition and overnutrition.

The energy requirements associated with malabsorption, increased work of breathing, chronic inflammation and infection result in recommendations of an energy intake 120%- 150% greater than the general population. A diet unrestricted in healthy fats and high in carbohydrates leads to better growth. Recommendations include: 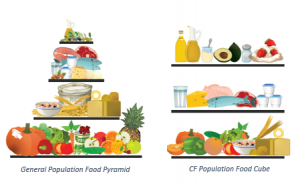 Pancreatic enzyme replacement therapy (PERT), along with vitamin supplementation, is an essential part of the management of pancreatic insufficiency in CF (Saxby et al, 2017). It is important pancreatic enzyme replacement capsules are taken with the first mouthful of foods that contain fat, carbohydrates and protein. The enzyme dosage is related to the fat content of food ingested and an additional dose may be needed if the meal lasts more than 30 minutes.

Creon® is a commonly used PERT in CF. It has a slow release formula designed to deliver enzymes to the duodenum. It can be given as granules mixed with an acidic fruit puree in infants and small children or taken as capsules in older children and adults. PERT adequacy is assessed clinically by monitoring nutritional status, signs of malabsorption and weight gain. 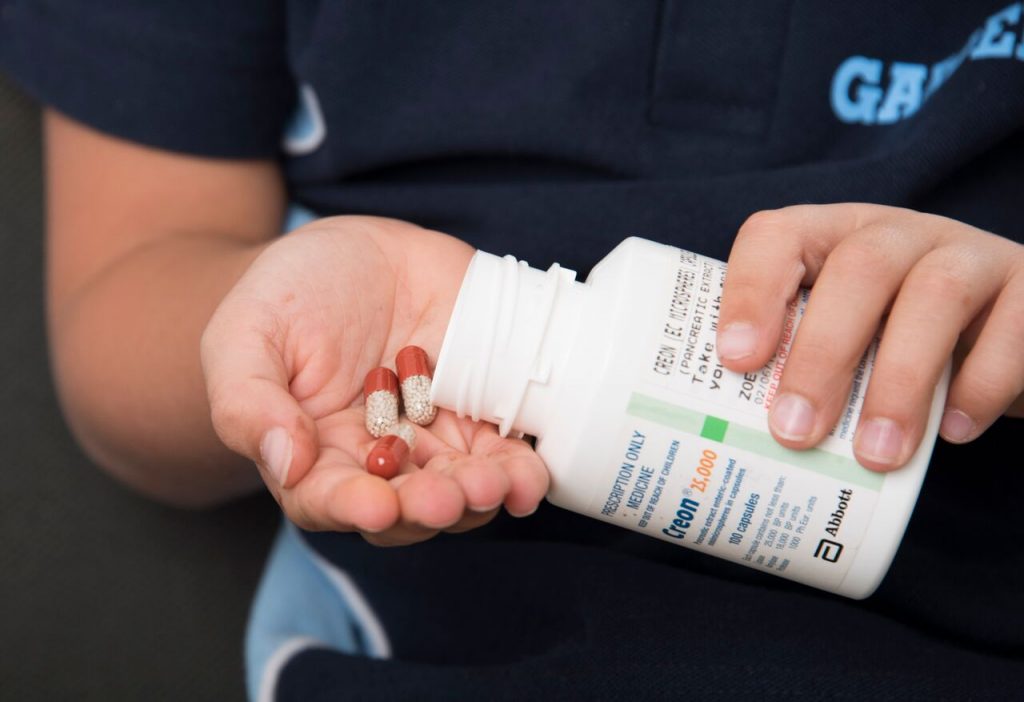 Those with CF, especially the pancreatic insufficient, are at risk of fat-soluble vitamin deficiencies. VitABDECK® is a CF specific multivitamin for routine supplementation.

The CFTR defect results in abolition of normal chloride conductance with consequently poor sodium reabsorption into the cells and a high concentration of salt in sweat. This increased loss of sodium and chloride with exercise and in hot temperatures, predisposes the individual with CF to salt depletion and dehydration. Sodium supplementation is recommended in Australia.

Enteral feeding can be an effective way to optimise nutrition in those not meeting nutritional requirements. Low profile Percutaneous Endoscopic Gastrostomy (PEG) tubes are often used in children. Intermittent nasogastric tubes may be used by those who would rather a less invasive approach. The CF dietitian will prescribe the appropriate nutritional supplements.

The prevalence of CFRD increases with age and is becoming one of the most common co-morbidities associated with CF. It is linked with decreasing lung function, poor nutrition and increased respiratory exacerbations. Acinar atrophy, fatty infiltration and pancreatic fibrosis occur with advancing age and results in decreases in insulin producing beta cells (Ornstein, Rosentstein & Stern, 2000). CFRD affects approximately 20% of adolescent patients and 40-50% of adults (Ronan et al, 2017).

Although CFRD shares similar characteristics with type 1 and type 2 diabetes, it is managed with a typical CF, high energy diet and insulin. All CF patients should be screened for diabetes annually from 10 years of age.

CF is a chronic life-limiting disease, with a complex and high treatment burden. Anxiety and depression are reported to be two to three times higher for individuals with CF and their carers (Quittner, Abbot, Georgiopoulos, Smith, Hempstead, Marshall, Sabadosa & Elborn, 2016). This can be exacerbated at times of diagnosis, hospital admission, specific medical interventions or another diagnosis e.g. CFRD. Anxiety and depression are normal at times of stress, however, if untreated can lead to unresolved grief and complex trauma which is associated with poor health literacy, low adherence to treatment regimens and poorer health outcomes. 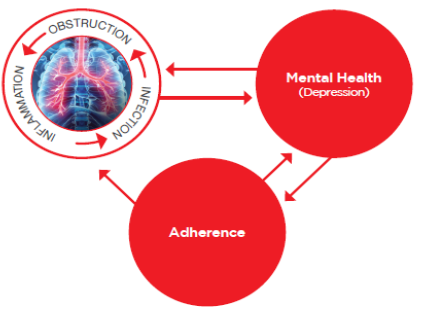 The incidence of depression among children and adults with CF has been reported to be up to 30%. It is recommended that adolescents and adults with CF (ages 12yrs – adulthood) are screened annually for depression and anxiety (Quittner et al, 2016). Living with CF can be emotionally and physically challenging for the patient and family. It is important to recognise and treat anxiety and depressive symptoms in people with CF and their carers, as this can impact on treatment adherence, family functioning, quality of life and has been associated with reduced lung function and increased hospitalisations.

Abdominal pain has been identified as the most prevalent pain issue in 60% of children and 36% of adults. Headaches associated with sinus problems and musculoskeletal pain commonly contribute to a poorer quality of life. Chest pain is often associated with pulmonary exacerbations and can also be associated with physiotherapy. Half of patients with CF do not communicate their pain with a health professional, therefore it is important to include pain assessment as part of the initial assessment (Havermans, Colpaert, Boeck, Dupont & Abbott, 2013).

Between 40 and 60% of children report feelings of mild to intense anxiety before an invasive medical treatment. This can also be an ongoing issue for adults.

Children can experience longer term behavioural and psychological issues associated with regular medical procedures. These may include: sleep disturbance, nightmares, separation anxiety, increased irritability, and aggression and temper tantrums. Anxiety or trauma associated with medical treatments can present differently in children depending on their developmental stage. Having an illness or how the illness is perceived can also cause regression to a child’s development.

If a child is experiencing ongoing anxiety and distress associated with their medical treatment, and it can’t be managed with the strategies mentioned above, then it is important to seek professional help. Referral can be made to the Paediatric Consultation Liaison Program, Acute Services Directorate, Perth Children’s Hospital.

Cystic fibrosis transmembrane conductance regulator (CFTR) is expressed throughout the entire body resulting in multi-organ manifestations and comorbidities. These may include: